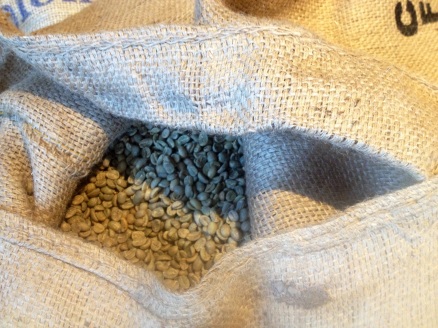 Raw coffee beans, like these, are imported and used in the coffee roasting process. 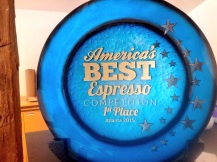 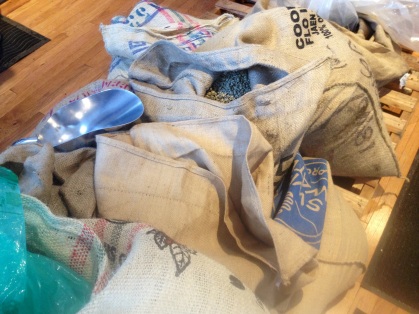 Large bags of raw coffee beans are imported each week to be used for roasting.

Owner Jesse Harriott has been roasting for almost a decade, beginning in his graduate school days in Louisville, Kentucky. Here, he worked as a barista for Sunergos Coffee and credits his time as an apprentice in preparation for starting his own business.

Harriott decided to return to Ithaca to launch a coffee roaster in his hometown. Located off Route 79, Copper Horse Coffee opened in September 2014.

“We wanted to start out as lean as possible,” says Harriott. “And we want to stay lean and flexible and fill in niche areas.”

With the support of a few local accounts, Copper Horse Coffee has expanded to many more, both regional and local. Harriott says he respects other established coffee places, like Ithaca Coffee Company, but does not wish to franchise his brand.

“For me, remaining small and sustainable is enough,” he says. “There’s not a lot of pressure to do things a certain way.”

Busy with running his own competition for best house blend at Coffee Fest, Harriott relied on a friend, John Letoto of Houston, Texas, to pull shots for him in the espresso competition.

“I was trying out different blends and sending samples to him,” Harriott says. “Then he’d send them back and give me feedback and I would send him an improved roast.”

According to Harriott, the key to any competition is figuring out what the rules are and training for the score sheet. Specifically, Coffee Fest judges look for flavor, flavor complexity, body and mouth feel, after taste and finish of the espresso. Harriott’s training allowed him to succeed in all of these categories.

“In order to win the best espresso,” he explains, “you have to be good at what you do, and we prepared and practiced for it.”

Harriott says he was surprised by the America’s best espresso award.

“It was fantastic…I was overwhelmed and actually in shock.”

“It feels like winning the gold at the Olympics,” Scott says. “It is a life’s dream coming true.”

Scott says his happiness is for Harriott. “It’s a euphoric feeling… to be a part Jesse’s dream, especially because Copper Horse is only five months old.” Despite its infancy, Copper Horse Coffee is making a name for itself.

With a heart for social justice, Harriott chooses the best specialty grade coffee beans to honor its farmers. He uses the farmer’s real name on his roasts, personalizing and giving credit to the processing style of the bean. For Harriott, his coffee is more than just a good beverage.

“I love that it’s something you produce and is judged by the merit of the cup,” he says.

Harriott’s method of roasting coffee beans yields his signature blends of Copper Horse Coffee. He follows a meticulous routine and keeps detailed notes of every roast. So far, Harriott has singlehandedly roasted over 260 batches in five months. He focuses his unwavering energy and attention into every roast and invites visitors to stop by and enjoy free samples.

For now, the goal of Copper Horse Coffee is to be agile and available. Harriott’s passion for roasting coffee propels this ambition.

“Coffee should be good,” he says, “just good, and we should do our best to make it taste good for everyone.”

Emma McQuade is a senior at Ithaca College’s Roy H. Park School of Communications where she is pursuing a degree in Journalism and Spanish. Emma has written and published work for the college’s award-winning newspaper, The Ithacan. Here, she served as Multimedia Editor and was awarded the Multimedia Story of the Year. With a strong passion for video editing, Emma served as an assistant editor for Ithaca College’s television series, Dropouts. Emma is creative and adventure seeking. She has a passion for visual storytelling and all things Adobe. You can follow her on Twitter @EmmaMcQuade1 View all posts by Emma McQuade